David said to Saul,
‘Let no one lose heart on his account; your servant will go and fight this Philistine’.
But Saul answered David,
‘You cannot go and fight the Philistine, you are only a boy and he has been a warrior from his youth’.

The Lord who rescued me from the claws of lion and bear’. David said ‘will rescue me from the power of this Philistine.‘
Then Saul said to David, ‘Go, and the Lord be with you!’ 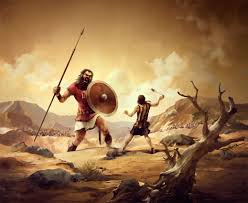 But David answered the Philistine,
‘You come against me with sword and spear and javelin, but I come against you in the name of the Lord of hosts, the God of the armies of Israel that you have dared to insult. Today the Lord will deliver you into my hand and I shall kill you; I will cut off your head, and this very day I will give your dead body and the bodies of the Philistine army to the birds of the air and the wild beasts of the earth, so that all the earth may know that there is a God in Israel, and that all this assembly may know that it is not by sword or by spear that the Lord gives the victory, for the Lord is lord of the battle and he will deliver you into our power.’

1. Blessed be the Lord, my rock
who trains my arms for battle,
who prepares my hands for war.      Response

2. He is my love, my fortress;
he is my stronghold, my saviour,
my shield, my place of refuge.
He brings peoples under my rule.     Response

3. To you, 0 God, will I sing a new song;
I will play on the ten-stringed lute
to you who give kings their victory,
who set David your servant free.      Response 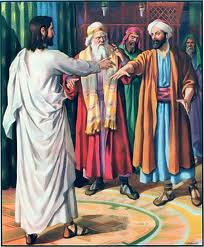 Jesus went again into a synagogue, and there was a man there who had a withered hand.  And they were watching him to see if he would cure him on the sabbath day, hoping for something to use against him. He said to the man with the withered hand, ‘Stand up out in the middle!’
Then he said to them,
‘Is it against the law on the sabbath day to do good, or to do evil; to save life, or to kill?’
But they said nothing.  Then, grieved to find them so obstinate, he looked angrily round at them, and said to the man,
‘Stretch out your hand’. He stretched it out and his hand was better.

The Pharisees went out and at once began to plot with the Herodians against him, discussing how to destroy him.

At the beginning of today’s first reading, Saul says to David, ‘You cannot go and fight the Philistine; you are only a boy and he has been a warrior from his youth.’ The Philistine had everything on his side from a human point of view – size, experience, weaponry, reputation. David had nothing going for him. He was young and inexperienced, and had no weaponry of significance. Yet he had a deep trust in the Lord’s ability to rescue him from the power of the Philistine. As a result, in this unequal contest, it was David who emerged the victor. There is a pattern in the Scriptures of people finding themselves before impossible odds, yet winning through because they place their trust in the Lord rather than in their own meagre resources. In the course of his ministry, Jesus often found himself up against opponents who, from a human point of view, seemed stronger, more resourceful and better equipped. At the end of his life, Jesus found himself up against the might of the Roman Empire and its supporting allies, the chief priest and elders of the people. As he hung from the cross, Jesus’ opponents seemed to have won, but Jesus’ trust in God at this moment of extreme vulnerability was vindicated when he was raised from the dead and the rejected stone became the cornerstone of a new spiritual temple. That deadly conflict at the end of his life is already anticipated in today’s gospel reading, shortly into his public ministry.

The same combination of religious and political leadership conspires to trap him and, at the end of the gospel reading, plot to destroy him. Yet Jesus is not intimidated by his enemies. He is determined ‘to do good’, on the Sabbath as much as on any other day. He would heal the man with the withered hand, although it would fan the flames of opposition to him. His trust in God left him free to do the good thing, even in the face of a formidable foe. Both readings encourage us to persevere in standing up to forces of death, trusting that the Lord will provide for us if we keep seeking to do what is right and good in God’s eyes.________________________________

The scripture readings are taken from The Jerusalem Bible, published by Darton, Longman and Todd Ltd and used with the permission of the publishers.  http://dltbooks.com/
The Gospel reflection is available with our thanks from Reflections on the Weekday Readings 2021-2022: My Words Will Not Pass Away by Martin Hogan and published by Messenger Publications  c/f https://www.messenger.ie/product/my-words-will-not-pass-away-reflections-on-the-weekday-readings-for-the-liturgical-year-2021-22/